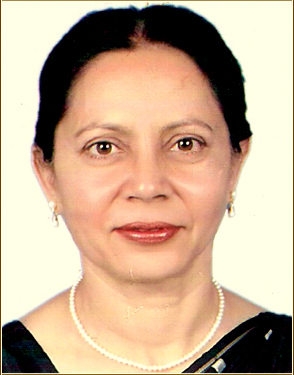 Dr. Sukhbir Kaur, Principal of Khalsa College for Women, a premier institution of education in Amritsar, is a dedicated academician and distinguished administrator with a futuristic vision for leadership. She inspires people around to strive for quality and excellence in Higher Education. She possesses an M.Phil and Ph.D degree in Punjabi from Guru Nanak Dev University, Amritsar. With her dynamic zeal for innovation and exploratory outlook in the field of higher education, she worked as a lecturer for 17 years and has been the Principal for 15 years.

She has published 5 books and 20 research papers in National and International Journals, as well as presented 29 research papers at National and International conferences/workshops. She has travelled to England, Holland, Canada, America, Germany, France, Belgium and Pakistan for various academic and official deliberations. She has attended International Joint Convention, PIPFD at Peshawar, Lahore and United Theological College, Bangalore. She was part of Terminology Workshop at Guru Nanak Dev University, Amritsar organized by Scientific &amp; Technological Terminology Commission of Human Resource Development Ministry, New Delhi. She was a key person in the UGC sponsored Training of Trainer’s Workshop, Capacity Building for Women in Higher Education Management, Kurukshetra University in the year 2005. She was actively engaged in a number of orientation programmes which include the 31st Orientation Programme in Planning and Management for Principals of Women’s Colleges, NUEPA, New Delhi in 2011 and Principal’s Orientation Workshops organized by Guru Nanak Dev University, Amritsar.
She is member of Pak-India People’s Forum for Peace and Democracy, New Delhi. She is also a member of National Assessment and Accreditation Council (NAAC), Bangalore, Advisory Board of Life Insurance Corporation, India, Northern Region, Inspection Committee, Guru Nanak Dev University and Selection Committee for Principals at GNDU’s affiliated colleges. She holds the position of being the first woman executive member of the oldest organization of Sikhs, Chief Khalsa Diwan. She remained the member of Senate, Syndicate, Finance Committee, Academic Council and College Development Council, Guru Nanak Dev University, Amritsar. She had been the President of Sports Committee, Guru Nanak Dev University 3 times.

She has a number of laurels to her credit. She was nominated as team member of Principals for Gyan Yatra organized by GNDU, Amritsar to visit educational institutions of Pune, Goa, Bombay, Ahmadabad and Delhi in 2003 and Jaipur, Bangalore, Chennai, Pondicheri and Delhi in 2010. Her books Nanak Singh Di Navalkari : Unpachhate Naqsh and Classiki Punjabi Sahit got recommendation for bulk purchase by Punjabi Academy, Delhi and Central Institute of Indian Languages, Mysore.
During her Principalship she has worked on curriculum development, innovative teaching methodologies, quality sustenance and enhancement in higher education and women empowerment. Under her administration, the college went in for Ist cycle of NAAC Accreditation in 2009 and obtained ‘A’ grade with a CGPA of 3.36 on a scale of 4. With relentless efforts, she strives for the progress of the institution and guides the staff in accomplishing the vision of being a centre of academic excellence. In all her activities she kindles the curiosity of the students to achieve more by their smart work.